The boating industry is back at the Arsenale of Venice

The third edition of the Venice Boat Show wraps up on a high note, with over 30 thousand visitors in the space of nine days and the confirmation of the vocation for sustainability. Mayor Brugnaro: “It is the home of the sea lovers. The next edition will be held from 31 May to 4 June 2023”.

After nine intense days, the 2022 Venice Boat Show concludes its third edition recording over 30 thousand visitors and strengthening its position. The goal declared in 2019 by the Mayor of Venice Luigi Brugnaro was to bring the boating industry back to the Arsenale, revive the ancient tese, and reinstate Venice as the home of the maritime industry and the sea lovers. 300 boats, 240 of which were in the water, for a total length of 2.7 kilometres, 200 exhibitors, over 2000 operators, 500 staff members, 402 accredited journalists, and more than 50 cultural and in-depth events including conferences and talk shows, most of which dedicated to the theme of sustainability, the health of the sea, and new electric and hybrid propulsion systems: the 2022 Boat Show has succeeded in its objectives, confirming the city’s role as the capital of the sea and strengthening its candidacy as World Sustainability Capital.

Pleasure boating came out stronger and, being a guest of the Serenissima, showed its best image. The boat has been an intimate place, a private island, a place where to experience affection and share peaceful moments but also where to experiment, to talk about the future and technology.

The event was supported by the Italian Government and the Veneto Region by being officially opened by the Minister of Public Administration Renato Brunetta, and visited by the Minister of Economic Development Giancarlo Giorgetti, the Minister of Economy and Finance Daniele Franco, the Governor of the Veneto Region Luca Zaia, and Roberto Luongo, General Director of the Italian Trade Agency. The event was also held in close cooperation with the Italian Navy, which granted the area of the Arsenale of Venice. Once again, the Boat Show was organised according to a sustainable event management system, for which it received the ISO 20121: 2013 certification from RINA Spa.

“With this Boat Show the sea lovers responded to the call and demonstrated the allure of sailing,” commented Luigi Brugnaro, Mayor of Venice and organiser of the event. “It was an important edition, which consolidated the event in the nautical exhibition calendar and which encourages us to do even better for the next year. It was a well-attended Boat Show, full of green technological innovations. Boating is one of the sectors that perform best in our country and for which Italy holds a world record. Next year we will be back from 31 May to 4 June, in the spaces of the Arsenale, again with the fundamental cooperation of the Italian Navy, and with many new features. I want to thank all those who have chosen to come to Venice, from the smallest to the largest companies, the many visitors who have been able to arrive directly by boat, the employees of our subsidiary companies, from Vela to the AVM/Actv group, Venis, Veritas, San Servolo Servizi, Fondazione Musei Civici, and the City Council and the Metropolitan City of Venice. Thank you to the more than two thousand people (stand assistants, hostesses, workers, reception and catering staff, sailors, sales staff, cleaners, transport and various services) who worked to ensure that everything ran smoothly. It truly is a team success! You have the praise of the City and my own for your commitment. Thanks to the Government and the Region who honoured us with their presence, understanding how boating is a strategic sector for the whole country, with its 8.000 km of coastline. The Venice Boat Show will continue to develop its vocation for sustainability: the interest of many companies looking to the future and to green nautical transport, such as E1, open up new scenarios for the application of technological research on an industrial scale, just like it happens in Formula 1 cars. Until next year, then. Because here in Venice, naval art has finally returned home”.

“Over 500 staff members ensured the functioning of the ‘city of boating’ during the 9-day event,” adds Fabrizio D’Oria, COO of Vela Spa, the subsidiary organising the Boat Show. “The organisation worked well in all its sectors, and for this, I would like to thank all my co-workers one by one. We have many ideas for the next edition, projects that will enrich the content and opportunities for exhibitors and visitors. The magic of the Arsenale and of our city can still leave many speechless“.

At the third edition of the Boat Show the three big Italian groups, Ferretti Group, Azimut Benetti, Sanlorenzo, as well as Sunseeker and Beneteau, participated enthusiastically. The Wally brand presented a world preview of the Wallytender58. Absolute demonstrated to believe in the event by bringing a large part of its production, as did Sessa, Frauscher with its hybrid production, and many others.

The participating shipyards and dealers are satisfied. From Timone Yacht, which, through various companies, represents many brands and above all the Azimut Benetti group. “The end result is positive,” says owner Luigi Gambelli, “it was a high-profile turnout. A Boat Show like this one allows you to be hospitable and to carefully follow those who arrive and let them enjoy an onboard experience in a wonderful location“.

From the Tyrrhenian Sea comes the testimony of Cantiere Rizzardi, which exhibited In-Five, a fast powerboat that was very much appreciated. “The effort of coming to Venice,” explained Giampaolo Capponi, of the sales department, “was worth it: we will definitely be back and we will do so with more boats. Such setting is not only wonderful but also a catchment area for very important clients, bringing results from an economic point of view”. An ‘Adriatic’ premiere was that of Sherpa 80, proposed by Arcadia with the cooperation of Blu Yachts: “This has been a rewarding event in a unique setting,” said Francesco Ansalone. “Thanks to this Boat Show we were able to involve customers sailing in north-eastern Italy and the Adriatic Sea: Italy, Germany, Austria, Poland, the United States, Turkey, and Hungary”.

“The signals from our exhibitors are of satisfaction and also surprise for the number of clients and contracts closed,” adds Alberto Bozzo, the Show’s marketing manager, “This makes us happy because exhibitors have to win and be satisfied with the Show. Many shipyards have confirmed their participation to next year’s Boat Show, asking for the same positioning and more berths. The public coming from Northern and Eastern Europe makes this Show an international event, and the future speaks of an expansion of the Show“.

Moreover, the 2022 Venice Boat Show has been the spotlight for TV products and the launch of traditional city events such as the Festa della Sensa and the Vogalonga. On Sunday 29 May, Tgr Rai did a live coverage with guests and services. Then, on Friday 3 and Saturday 4 June, the city was the venue for ‘Live In’, the Sky TG24 format, two days of live broadcasts, interviews and discussions with national and international personalities from the worlds of politics, economics, science, culture and entertainment.

As usual, the Boat Show was the stage for various sporting events taking place in the 30th year of the victory of the Moro di Venezia, testimonial of the Boat Show: the Louis Vuitton Cup, which was displayed in one of the Tese, as well as the Salone Nautico Venezia Cup regatta, organised with the Compagnia della Vela, that saw the victory of Circolo Velico Bibione in its first edition, and the fifth Micro Class Italian Championship. Adding up to this, there was the arrival in the Arsenale of the Voga Posse, an adventure that brought some fifteen Milanese professionals down the river Po with their slender coxed four. Then the E-Regatta, which was dedicated to electric-powered boats in its various trials, organised by Assonautica with the Venice Motonautica Association, in its second edition. The Boat Show was also an opportunity to present the new E-1 sports competition, desired by Alejandro Agag and Robi Basso, which will feature one-design Race Bird electric-powered boats, whose first registered crew is the Venice Racing Team. Finally, the Venetian navy was the protagonist with a tesa dedicated to local shipbuilding and many shipyards presented their boats in the outdoor spaces. The “Nuovo Trionfo”, the Venice Gondoliers’ Association and courses for children in rowing and sailing enriched the event’s programme. 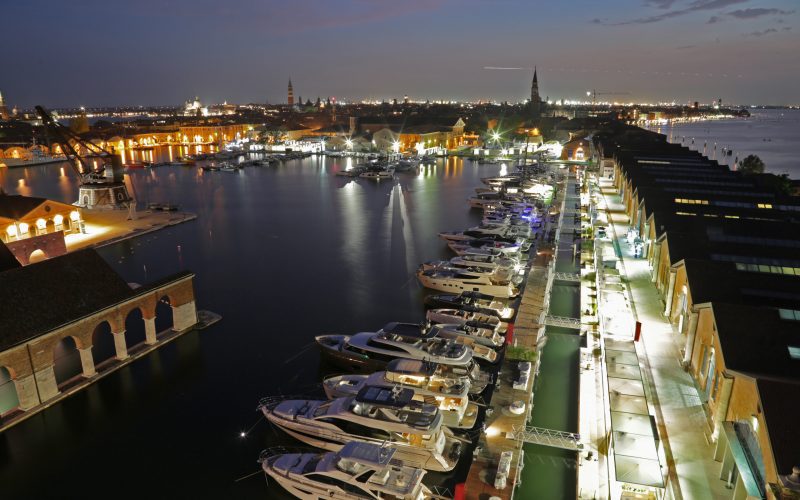 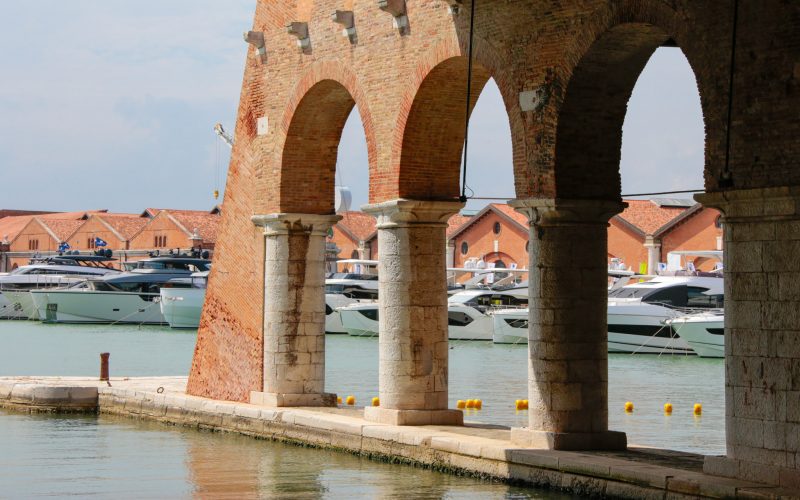 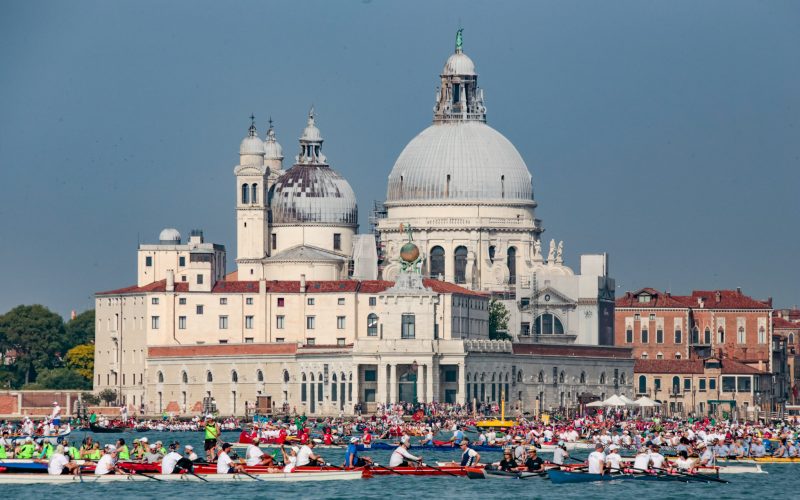 The National Archaeological Museum of Venice and the Boat Show

“The art of shipbuilding is back home” in the area of the Arsenale in Venice, from May 28th to June 5th 2022. L’arzanà de’ Viniziani (the Venetian dockyard as mentioned by Dante Alighieri) is one of the symbolic places of the city, the factory of the maritime power that assured...

Become a sponsor
of the Venice
Boat Show 2023