“The art of shipbuilding is back home”

The second edition of the Venice Boat Show ended in a unique and fabulous atmosphere with the full satisfaction of exhibitors and visitors exceeding the 30,000 mark. Venice once again confirms its role as gateway to the East in pleasure boating.

The promise that the Mayor of the City of Venice, Luigi Brugnaro, had made and set in the ancient red bricks of the historic Arsenale was clear: “I want the Boat Show, along with the Biennale of Architecture, to mark the restart of Venice and Italy on the whole” as he has always said. And the promise has been kept. Under a warm summer sun, the 160 exhibitors closed the second edition of the Venice Boat Show with great satisfaction, having welcomed over 30,000 visitors. Those who participated for the first time almost did not believe how their participation could take on value in such a warm atmosphere and in the true sense of the word ‘marine’. The Venice Boat Show opened its doors not only to the market, but also to culture and sustainability, which was the main theme of over thirty conferences that explored every aspect of sailing and shipbuilding: from design to engines and the environment. Venice therefore claims its central role in the very contemporary debate on the sea and sustainability at the Boat Show as well.

The City Mayor, Luigi Brugnaro stated: ”The art of shipbuilding has truly come back home and the numbers of this second edition of the Boat Show have confirmed that the idea we had since 2018 in giving Venice the opportunity to showcase its nautical excellence was right and far-sighted. The City is once again the queen of the seas in the broadest cultural sense possible. We have shown our skills in the design and architecture of construction and traditional activities. During these past few days, we can say that Venice has truly remarried the sea and has done so by bringing its excellence as a dowry. Therefore, the next appointment is at the 2022 edition. From Saturday, May 28 to Sunday, June 5, 2022 the Arsenale will once again host a show that pledges to be extremely innovative and eventful. We would like to say a special thank you to all those who took part in the excellent organization of this edition by dedicating their time and efforts. Thank you to all the exhibitors who, despite this difficult moment, chose to be here with their boats and thanks to the many who came to visit the exhibition. All together we have shown the delight of sailing and how fascinating it is to fall in love with the sea. Our utmost gratitude and thanks go to the Italian Navy for opening up its spaces and to the Venetian NHS for all the health protocols that were put in place for the show. Thanks also to all the civil and military institutions, the law enforcement agencies and the voluntary associations that all collaborated. Thanks to those who guaranteed safety, cleaning and transport: a great team success! We look forward to seeing you at the third edition in 2022“.

The Boat Show is not the only initiative to make Venice a capital of pleasure boating, all the marinas and shipyards will be put into a system, as well as the whole city starting with its palaces on the Grand Canal to complete the offer of the Show’s side events.

This edition was going to mark the restart and so it was. The Arsenale is a unique environment, the pulsating seafaring and naval centre of the Venetian Republic, with its water basin of 50,000 m2, over 1000 linear metres of pontoons for about 150 boats in the water, 30,000 m2 of outdoor exhibition spaces, and 5,000 m2 indoor pavilions. The absolute best of our pleasure boating industry was present. The Venice Boat Show was the first event of this size to be ”physically” held in Italy. Everything took place in compliance with the restrictions and measures required by the difficult pandemic situation, but always with the utmost safety thanks to a system of limited admissions at different pre-booked time slots.

The Show confirms that a “boat” is an intimate place, to be enjoyed with family and friends.  This is one of the reasons for acquiring a market that comes out of the pandemic even stronger. In 2019/2020, the indicators gave the nautical industry a total value of almost 5 billion euros, and it has continued to grow in 2021.

Giovanna Vitelli, Vice-president of the Azimut-Benetti Group, who exhibited at the show for the first time, says: ”Because of its appealing location, the efficiency of the organization and the positive flows of visitors, it is most definitely worth repeating this experience. We want to be here next year”.

“At its second edition, the Show brought out its many qualities, along with great appeal and commercial potential.“ said Alberto Galassi, CEO of the Ferretti Group. “There was a good turnout; an excellent flow of Italian and foreign customers from Switzerland, Croatia, Slovenia and Poland, especially considering the particular period, which confirms the fascination of an event that turns out to be the most interesting appointment in the Eastern Mediterranean area. All these owners and their captains are obviously impressed not only by the beauty of the city but also by the opportunities available to them, ranging from hospitality to cultural destinations, art and restaurants. I would say that for the Boat Show and for Venice, these are only a few of the satisfactions. “

Great satisfaction from Luigi Gambelli, CEO of the Timone Group, one of the most important operators in the Adriatic coast: ”For me this is an exceptional show that we have exhibited at and I am confident that it will continue to grow – he stated – I am a supporter of this show because it is a view of the Adriatic for the Eastern European market that arrives with pleasure at the Boat Show for a number of reasons: both to see the yachts and to see Venice”.

The Arsenale was also the stage for launching Venice as the world capital of sustainability. To protect the sea, the oceans and water in general as a primary resource of the planet Earth, new technologies for hybridizing boats, the recovery of marine plastics: environmental sustainability was the core theme of the second edition of the Venice Boat Show, which over a span of 9 days hosted international experts to discuss the issue of protecting our waters from the threats that in recent years have become increasingly consistent, with the aim of seeking concrete actions to develop effective mechanisms to protect and safeguard the most sensitive marine and coastal areas, as well as the need to foster a new maritime culture. There were over thirty in-depth events and just as many dedicated to the public, a dozen events in the city.

The Boat Show also staged sporting events with sailing being the protagonist, thanks to the participation of internationally renowned sportsmen at the Italian Micro Class championship and the Match Race—Trofeo Salone Nautico Trophy 2021. There was no lack of emotions: two of the members of the Luna Rossa Prada Pirelli team, Max Sirena and Gilberto Nobili, relived and talked about their America’s Cup experience. Powerboating was the protagonist with the arrival of the historic Pavia-Venice competition in which several great champions also competed. Venice also hosted the Full Electric regatta, called ”E-Regatta“, which was organized by the partners and coordinated by Assonautica di Venezia with Slalom and Ballerina events, a brand new technical/artistic format that saw the boats challenge each other in a test of manoeuvrability skills to the rhythm of music, but also in terms of duration and ”endurance”.
The historical Venetian boatyards also found room at the Tese of the Arsenale exhibiting the gondola as a symbol of water transport through the canals of Venice, but also other wooden boats that belong to the lagoon. Moreover, there was also space for arts and crafts, equipment and high-end marine accessories.

“I would like to thank the exhibitors for believing in the project – says Alberto Bozzo, commercial director of the Show – with their feedback we can immediately start preparing for the 2022 edition”. “First of all, my thanks go to the Mayor, Luigi Brugnaro and the Municipal Administration who strongly believed in this project and wanted it for Venice”, says Piero Rosa Salva, Sole Director of Vela Spa.

Fabrizio D’Oria, operating director of the Show, concludes: ”I thank all the staff, all the exhibitors, suppliers, all the people who spent their time making sure this Show went ahead with the physical presence of all operators and visitors and that all the safety measures were implemented. The Show was also a driving force for the local economy, it employed over 1,200 people involved in the general organization, hostesses, safety, security, cleaning services, docking staff and great satisfaction from the O-Group that provided the catering and refreshment services“.

The Venice Boat Show-Salone Nautico Venezia is promoted by the Municipality of Venice and organized by Vela spa with the cooperation of the Italian Navy-Marina Militare Italiana.

Partners of the event are Eni, Intesa Sanpaolo, Generali, Consorzio Prosecco DOC and the Chamber of Commerce of Venice and Rovigo. Technical partners Mole Urbana, e-concept and ABB, O-Group and GiPlanet. 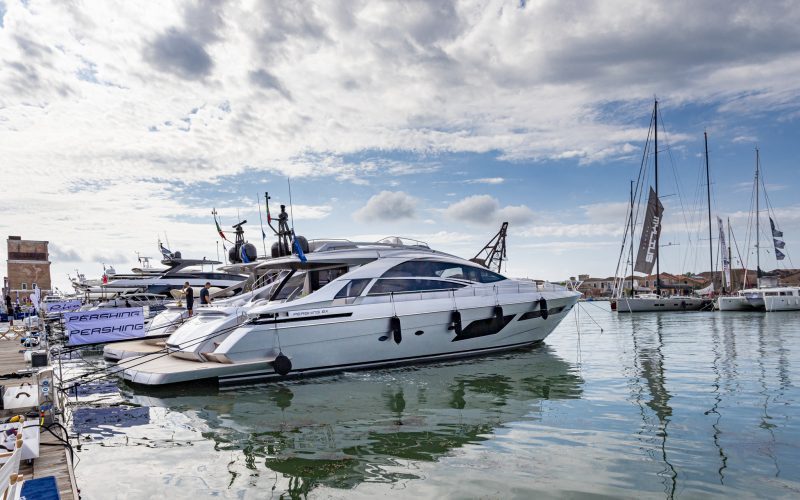 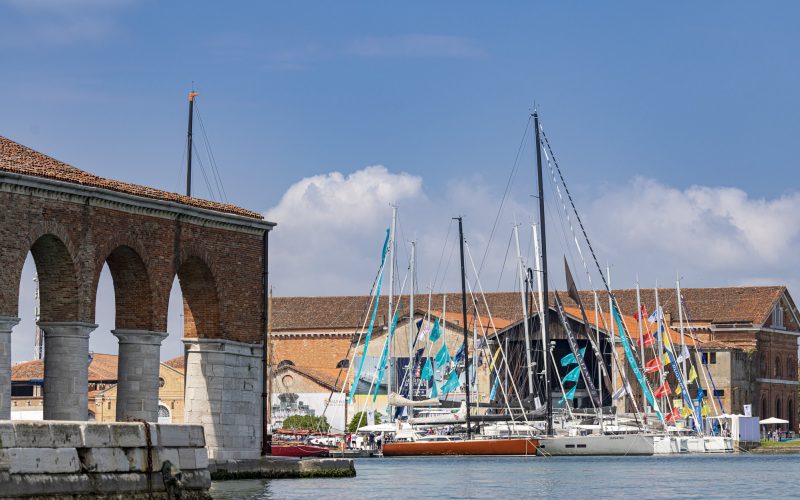 “Removal of Marine Litter and Circular Economic: Challenges and Opportunities”

On June 3rd 2021, the H2020 MAELSTROM and InNoPlastic Projects set the stage for the international workshop “Removal of Marine Litter and Circular Economic: Challenges and Opportunities” that will take place at the historic Arsenal of the world heritage site of Venice and its lagoon. For the first time, the...

Become a sponsor
of the Venice
Boat Show 2022